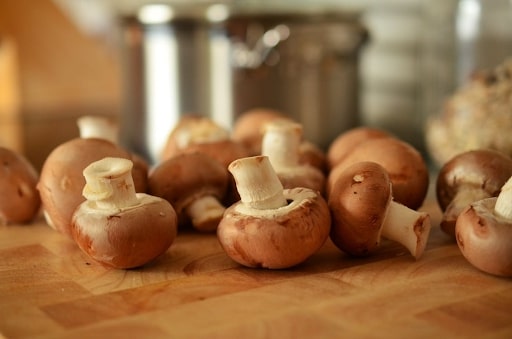 There are plenty of mushrooms out there that can make for great ingredients in many types of healthy meals. If you’re looking for a new ingredient to cook with, it might be a good idea to try out some of these mushrooms from your local farmers market or organic food store. Many of them are packed with protein, fiber, and other nutrients that can keep you healthy, making them a guilt-free way to add flavor to some of your favorite dishes.

These are a common variety that you’ve definitely seen in stores before. They have a more mild flavor than many other mushrooms, making them a great introduction to mushrooms for anyone who hasn’t had them before. Even picky eaters, like kids, can appreciate them. Eat them raw in salads or top a pizza with them.

These golden mushrooms have more of a meaty texture and a pleasant aroma. Some have described the flavor as “peppery,” making them an interesting addition to many meals. They contain many nutrients, including a surprisingly high amount of vitamin C.

Cremini mushrooms are a young portabella mushroom. They can be used for many of the same purposes as white button mushrooms, but they’re a bit more firm and have more flavor. You might see them sold as “baby bellas” due to the rising popularity of the versatile portabella mushroom.

These are commonly used in Asian recipes and can be found at the store fresh or dried. They have a savory flavor and contain many compounds that can actually benefit your health, including some that have been shown to improve heart health, improve immunity, and fight back against cancer.

These mushrooms are large and meaty, which is why it’s no surprise that they have found a home in many veggie burger recipes. They can be grilled and seasoned if you want to eat them on their own, and they’re quite delicious no matter how you prepare them. Portabella mushrooms have also found a place in Italian recipes, where they add a lot of flavor and depth to sauces. Some enterprising carbohydrate cutters have even begun using these large mushrooms as substitutes for burger buns!

These flavorful mushrooms—often found dried in organic food markets—are used in sauces, soups, and some pasta dishes. They can be used in risotto as well. If you’re looking for a way to change up one of your favorite carbohydrate-heavy dishes, this mushroom should be added to your shopping list.

You may have seen these large, white mushrooms growing on the sides of trees outside. They have many uses in Eastern cooking, including Japanese and Chinese meals that include soups, stir-fries, and more.

If you want to know more about how you can make the most out of all kinds of produce, we can help. Visit the Organic Restaurants website and blog for more helpful tips, and see how easy it can be to add some healthy foods, like mushrooms, to your diet.

Why Restaurants Should Go Organic

How To Shop In Season

Make Your Next Barbecue More...