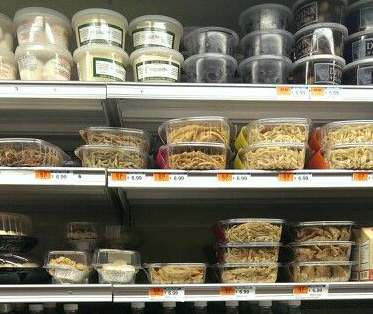 As processed, pre-made foods permeate grocery store shelves at an ever- increasing rate, it has become more difficult than ever to find healthy food in an unaltered state. While pre-made foods are the definition of modern dining in our “pedal to the metal” world, it’s more than a little comforting to know that stores dedicated to selling high-quality, organic fare do still exist. We found more than an organic supermarket in Harvest Co-op; instead, we found a community centered on individual health and local prosperity.

Upon entering the building, the customer is met with a set of co-op standards placed prominently by the doors. The seven rules are the commandments which guide the co-op chain internationally and detail everything from membership principles (membership not required for those who wish to shop or participate in the co-op) to community involvement. This is to say, that harvest co-op is less of an exclusive clubhouse, and more of an international community-builder; an organization dedicated to giving back to the communities which stock its shelves.

The co-op looks unassuming from the first few rows of groceries, and features many of the pre-packaged food brands common to most mainstream supermarkets: items like peanut butter, cereal, and pre-boxed and refrigerated meals to-go. However, upon further inspection, the distinction between the co-op and a traditional grocery store becomes clear- most everything is organic or grown locally.

The back of the store is stocked entirely with organic, local produce fresh from the farm. Potatoes, carrots, and lettuce line the fridges, without any processed “food products” in sight. These nutritious foods are very real and overwhelmingly untouched by the modern industrial farming system. Yet, despite the labor-intensive growing processes necessary that no doubt went into growing this produce, it is all surprisingly affordable. Fruits and vegetables from the co-op range around the same price as conventionally grown produce, but with an organic label.

Next to the produce aisle stand rows of self-serve grain and cereal dispensers. Full of every variety of grain and additive-free granola, this “cereal” aisle of the co-op did far more than impress us. The bins were well-stocked, sans a few empty containers, and contained grains labeled “organic” and “GMO-free”; a far more transparent labeling system than the standard American grocery store. The co-op was nothing short of a business with heart.

The pre-packaged section of the short was equally as exemplary as the produce and grains sections. Refrigerated meals of all ethnic backgrounds fill the fridge; we personally chose vegan dumplings, vegetable sushi, Kombucha (the fermented tea drink), vegan pasta with sauce, and a vegetarian tuna wrap. The pre-made meals were unanimously enjoyed, with the exception of the vegan dumplings, of which we had mixed opinions. Unlike typical grocery-store sushi, which tastes stale after sitting in a grocery freezer, the co-op’s sushi was delicious and tasted fresh (and if it were fresh, it wouldn’t have shocked us- all of the aisles were being continually re-stocked during the entire time we were visiting).

Although overwhelmingly positive, the co-op had its shortfalls. The area around the co-op was on the rough side, with a number of questionable characters roaming in front of the store, some of whom entered, to our relative discomfort. This, however, may have been at least partially due to location or time of day; two other Harvest co-ops exist in the Jamaica Plain area of Boston and likely have a differing atmospheres.  Specific location aside, the co-op seemed slightly lacking in creature comforts. It was apparent that the store was designed for a busy customer who sought to pick up some organic food and leave for home immediately afterwards; there were no areas to sit, eat, or relax- just aisles of food and check-out lanes. In its entirety, this qualm is relatively minimal, figuring that the store excels as exactly what it is intended to be: a community food exchange.

Overall, we were left impressed with our trip to the harvest co-op, and would highly recommend it to individuals and families in search of wholesome, organic foods without the exorbitant price tag. Delicious, accessible food is what the co-op is all about- nourishing its members and community one home-grown piece of produce at a time.

Should I Preserve Organic Food...

How to Avoid GMO-Packaged Foods...