Restaurant Spotlight: Food That’s Out of This World at Veggie Galaxy 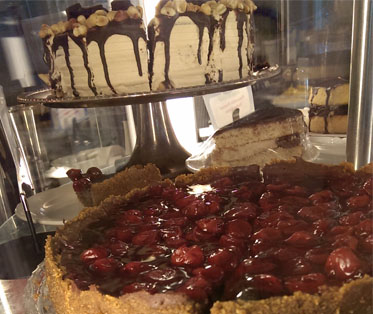 With the looks of a 50’s retro-futuristic diner, it is clear from first blush that a visit to Veggie Galaxy is an experience within itself. Enter this diner, and you enter a world unlike any other; racks and rows of delicious baked goods tempt you from your first step 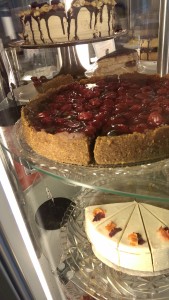 and diners chow down on hamburgers stacked with fresh veggies and thick patties. Fairly typical diner fare, you might assume. Only, there is no milk meat to be found on premises- this is a completely vegan restaurant.

Veggie Galaxy quite literally has every classic American diner food covered in a more contemporary, vegan-friendly form. From chocolate cherry cheesecake baked with locally sourced chocolate to the delicious grilled cheese, Veggie Galaxy is about as diet-conscientious as can be. Gluten intolerant? Veggie Galaxy has that covered, too, with a full gluten-free menu offered alongside the standard menu. Although the food may be missing the typical milk-and-meat staples of the common American diet, the food won’t leave you missing them by any means.

My first course, the tempeh and tofu bacon sandwich was nothing short of delicious. With a subtle hint of spice and a generous amount of pesto, this double-decker had the kind of flavor uncommon to store-bought vegan cuisine. This flavor was noticeably enhanced by the fresh veggies stacked on the top tier of the sandwich, between slices of whole-wheat bread grilled to perfection.

I next sampled the grilled cheese, which would have fooled any cheese connoisseur- despite the slightly more cream cheese-like consistency of the vegan cheese, I was left expressly impressed. The “Cambridge Square” black bean burger reached the same level of tastefulness. More savory than its ground-beef counterpart, the black bean burger easily topped my list as my favorite entrée of the day. Topped with vegan cheese and fresh veggies, the burger was stellar- and significantly better than the typical supermarket-grade veggie burger.
To wash it down, I ordered a vegan Coffee Milkshake, and it didn’t disappoint. Replacing dairy with coconut milk, the diner managed to add a new coconut flavor to the familiar flavor of freshly brewed coffee. Although unexpected (especially since I’m not much of a fan of coconut), it didn’t manage to adulter the major flavors and amazing texture of the drink.

Finally, to top off my lunch, I opted to sample Veggie Galaxy’s Chocolate Cherry Cheesecake. Although I was stuffed to say the least (whoever says that vegan food isn’t substantial clearly hasn’t been to Veggie Galaxy!), I took a slice back with me to eat later in the day. Impressive was an understatement- and although it had the richness and sweetness of any other cheesecake, my mild lactose intolerance appreciated it as much as I did.

Friendly staff, filling meals, and awesome baked goods are just a small fraction I found at Veggie Galaxy. Despite the occasional unexpected flavor from milk and meat-free products, the futuristic diner left me highly impressed overall. However, whatever you decide to order at Veggie Galaxy, a pastry or slice of cake from the revolving rack is a must, alongside a tall milkshake.

Veggie Galaxy truly has managed to set the bar for vegan cuisine- and us health food enthusiasts have taken notice.

How To Use Dairy Alternatives...

What are Fat-Soluble Vitamins: Absorption,...

The Most Recommended Organic Restaurants...