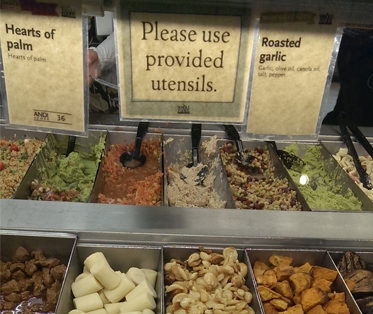 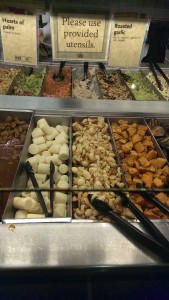 It’s no mystery why Whole Foods is an organic foodie’s dream. Whether shopping for groceries or meals on-the-go, Whole Foods has quite literally covered all of the bases from raw live Kombucha to pine nuts and kale chips.

Having never previously seen the “salad bars” at any Whole Foods, I was floored to discover that there was more than salad being served- more specifically, there was fare inspired from as far as across the world and as close as the nearest organic family farm. Indian food, Chinese-inspired cuisine, and American favorites with a vegan twist were just a few of the options out on the floor.

Served buffet-style, all of the options seemed to one-up any traditional country buffet; especially when it came to variety. Open-air serving trays were distributed among the space by type, which made the overwhelming plethora of cuisine far more accessible. On the American cuisine booth, one could find not only onion rings and burgers, but also texturized soy “un-chicken” made to look just as delicious as their meat-laden cousins.

The crowds at the location in Boston by Mass General Hospital were nothing short of jaw-dropping, either. The open space was quickly packed by lunchtime; all bets of a personal space-bubble were off. However, if the crowds were any indication of the quality of the food, these folks were clambering for the good stuff.

After stumbling about in a stupor of amazement for a few minutes (and nearly stepping on some feet on the way), I finally made up my mind and gravitated towards the Indian buffet table.

Although I must admit a personal penchant towards Indian food which may be coloring my opinion, Whole Foods had some of the best Indian food I had ever tasted. I opted for rice, a vegetable patty, and spinach sauce. All of the offerings had the kind of spice and heat common to authentic Indian food, and did well to satisfy my craving.

On the side, I also loaded sweet potato fries, roasted cauliflower, and golden sesame tofu into whatever available space remained in my box. After sampling a little bit of what each station had to offer, I found myself thoroughly impressed with not only the pure quantity, but also the quality of the food being served. This variety is far from the hometown buffet- style mystery meat of yesteryear; at Whole Foods’s buffet, knowing what you are throwing into your takeout box is just the beginning.

Each item in the buffet is meticulously labeled with contents and nutrition information, and does not shy away from making known which ingredients are organically sourced. To put it simply, feasting at the Whole Foods Buffet is not only about taste exploration, but an educational experience overall.

What also left me impressed was the conscientious choice of take-out packaging offered- recycled plastics or paper containers that were sturdy and easily sealable to maintain its integrity no matter how far you may need to travel before taking a lunch break.

However, while my overall reception was positive, there were a few minor factors that left me disappointed. Some of the food seemed to lose some of its goodness and flavor after it had been away from the heating plates for too long, as is characteristic of many soy meat-replacement products. While the “un-chicken” thrilled me with its spicy flavors when warm, as soon as it cooled down, it seemed a bit flavorless and rubber-like. However, this is less of a critique of Whole Foods than the nature of the food itself. One other small detail, the open-air buffet in a crowded buffet, occasionally left me squirming for fear of what these foods could have been exposed to, especially at the lunch-time rush. Although I did not see many workers switching out trays, I could assume that they had been changed relatively recently, as the entire selection was devoid of the over-baked, mouldering food that is so common to many buffets.

A few qualms aside, my trip to the whole foods buffet was a relatively redeeming experience. I was left feeling a unique mix of enlightened, amazed, and overwhelmed. I simply have never seen so many foods of such high quality and differing origin in one place at once. By far, Whole Foods provided me with one of the best-quality buffets I have ever seen, and a go-to place when you just want a little bit of everything Whole Foods has to offer.

How Restaurants Can Support Small...