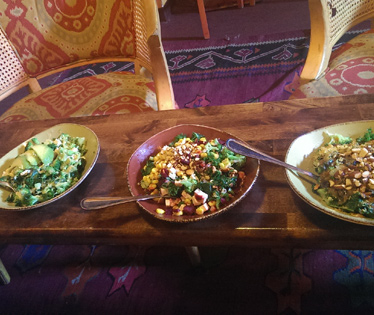 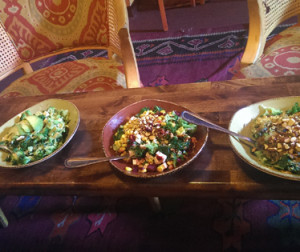 Wheat grass, nutritional yeast, and tofu. Is your stomach feeling queasy? To anyone sans organic foodies, these words elicit a dread response. Perhaps you are frowning now- sure doesn’t sound very tasty, you think to yourself. Get ready for a shocker- it’s actually delicious.

Enter: Life Alive Café.  Located in rustic Cambridge, Massachusetts, the Café is immediately made distinct by the planters of wheat grass lining its windows. Once inside, it is easy to be consumed by the unique features inside- hand-painted murals, naturalistic décor, and behind the counter, enough organic produce to fill a small supermarket. Needless, to say, I was blown away.

The menu, however, was something more daunting; with over 20 different organic entrees alone, I was paralyzed by the sheer number of options before me. Not that it was a bad thing- as a vegetarian myself, I am used to quite the opposite problem, often restricted to under five choices in any given restaurant (and in the average Italian restaurant, I am lucky if I have the luxury of more than two veg-friendly options). Here, I could eat everything on the menu- something those of us with diets that restrict our food choices would likely find not only incredible, but also unfamiliar and almost a bit frightening.

Not allowing myself to get caught up in the anxiety of so much variety (even the smoothies had additional “Nutri-boosts” ranging from avocado to spirulina), I settled on “The Adventurer” (Ginger Nama Sauce, corn, beets, broccoli, greens, shredded cheddar, tofu, tamari almonds, and quinoa over short grain brown rice), “The Swami” (Sweet Curry Miso Sauce, almonds, raisins, carrots, broccoli, greens, pearl  onions, and brown rice sprinkled with nutritional yeast), with a “Chai Alive” smoothie (chai, banana, ice cream, and chia-almond milk) to wash it all down. Feeling brave, I even ordered a one oz. shot of wheat grass- something every organic critic worth their stripes has tried at least once.

The food was delivered promptly by a wait staff nothing less than amicable, who found us at the seat we had chosen under a painted enclave on the second floor. I picked up my fork. And so it began.

Sampling “The Swami” first, my pace rapidly accelerated from picking to near-shoveling; amazing was an understatement. The sweet hints of raisin balanced the saltiness of the yeast and rice perfectly, which had been drizzled with Sweet Curry Miso Sauce, further enhancing the flavors of the plate.

My second dish, “The Adventurer” was just as good as “The Swami”, if not better. At one point, I audibly wowed- because it was actually one of the best fresh dishes I had ever tasted. No exaggeration here, folks- coming from an individual who dislikes more than 40% of all cooking, regardless of who cooks it, it’s something. One of the main draws to the dish were the pieces of beets sprinkled on top of the plate. Frankly, I don’t even like beets, and I never have- well, until now. The only word suitable to describe it is “incredible”.

So for those of you who declare that all organic food tastes like sawdust, I invite you to give Life Alive a try. Even better, do what I did and take the bold move to order the wheatgrass shot- which I soon learned wasn’t terrible tasting at all. Or, try a smoothie enhanced with aloe, kale, or even bee pollen- you might make faces now, but you’ll thank me once you give it a try.

Want to check them out? Visit Life Alive – Cambridge, MA

Best Organic Take-Out in the...